MOSCOW, August 10. /TASS/. Philippe Verger, a traveler from the French city of Tours, has completed his 3,500-kilometer journey to Moscow on a Russian-made Ural motorcycle and arrived to the Russian capital on Thursday evening, as scheduled. 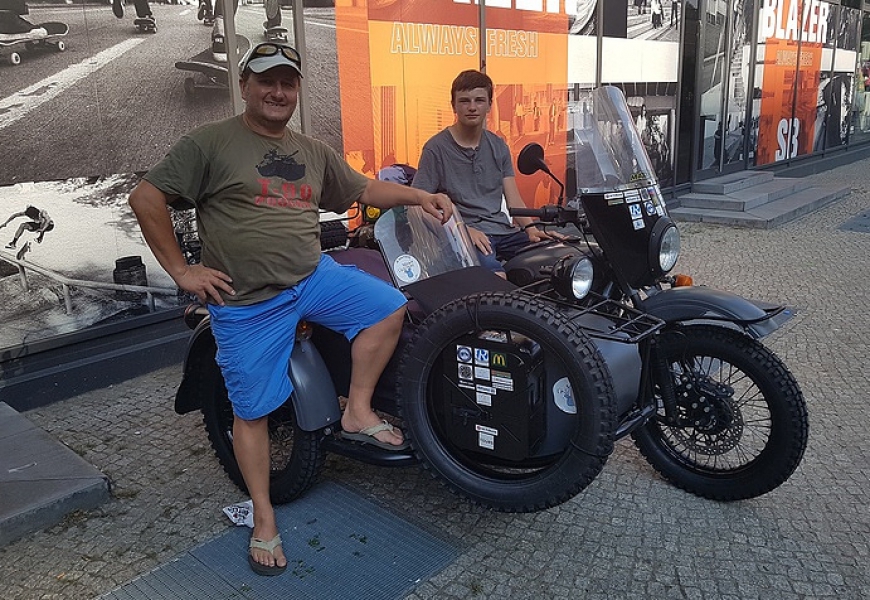 MOSCOW, August 10. /TASS/. Philippe Verger, a traveler from the French city of Tours, has completed his 3,500-kilometer journey to Moscow on a Russian-made Ural motorcycle and arrived to the Russian capital on Thursday evening, as scheduled.

"It was a wonderful journey. And we are happy to reach our main goal," Verger told TASS in an interview. "We are excited, because this is our first-ever visit to Russia, and we want to see as many things as possible."

During his voyage, Verger was accompanied by his 14-year-old son. They visited Germany’s Berlin, Poland’s Poznan and Warsaw, Lithuania’s Kaunas and Velikiye Luki (Russia’s Pskov region), and other cities.

"We travelled at the speed of about 80-85 kilometers per hour on our reliable Ural motorcycle," he said. "We experienced no technical problems throughout the entire journey."

Verger said that upon his arrival to Moscow, he made a phone call to his wife in Tours and they agreed to make their next journey to Russia together.

During their three-day stay in Moscow, the travelers want to visit the Red Square and the World War II museum and memorial at Poklonnaya Gora (Bow Hill).

According to earlier media reports, the French traveler has been interested in Russia for many years. He was elected vice president of the French national club of French owners of Russian-made motorbikes, Ural-France, which sees is mission in organizing trips, meetings and exhibitions to promote technical and economic exchanges between the countries.

Currently, Verger rides a motorcycle that he bought last year for 16,000 euros. He carries just three bags and a rain shelter.

Verger’s trip was funded by a number of French sponsors, and a film will be made about his journey. According to the traveler, he plans to transfer the sponsors’ funds to the French association Magie a l'hopital, which provides assistance to gravely ill children.

Verger has also said his tour was linked to the history of World War II. "It is important to keep the memory of the nations’ fight against Nazism and pass it over to next generations," he noted on August 2. "Russia made a decisive contribution to the defeat of Nazism and France pays tribute to its outstanding role in the common struggle.".