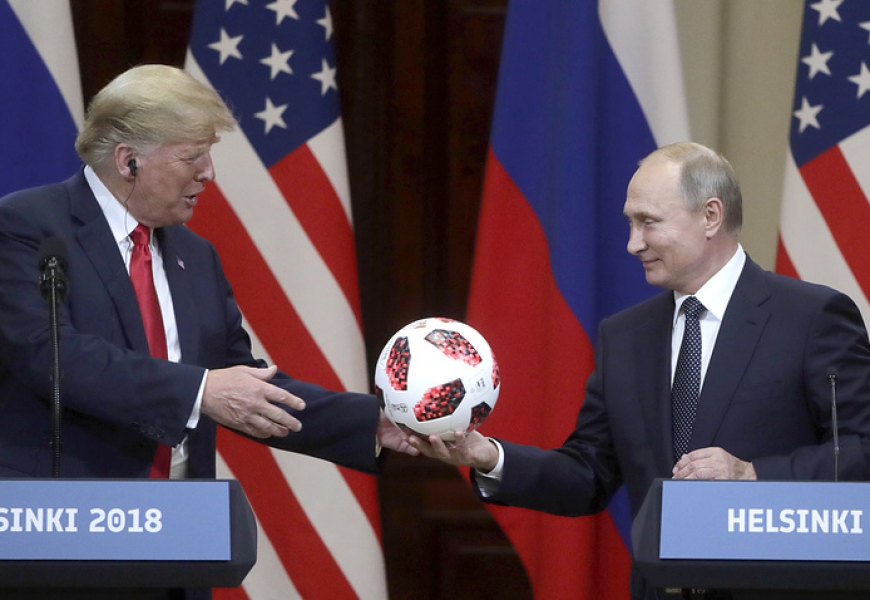 HELSINKI, July 16. /TASS/. Russian President Vladimir Putin presented his US counterpart Donald Trump with an official ball of the 2018 FIFA World Cup and wished the American leader a successful organization of the 2026 FIFA World Cup.

Putin handed over the official match ball of the 2018 World Cup to Trump at a press conference after their summit talks in Helsinki on Monday.

"As for the ball being in our court on the issue of Syria - Mister President (Trump) just said we have successfully organized the world football championship. And speaking about the ball, I am turning it over to Mister President," Putin said as he gave the official ball of this World Cup, Telstar 18 by Adidas, to Trump.

"The ball is now in your court," the Russian president said adding that such present is important since the United States will be hosting matches of the 2026 FIFA World Cup.

US President Trump accepted the ball saying he would definitely give this ball to his son Barron and then cast the ball to his wife Melania Trump.

In mid-June a unified bid on behalf of the United States, Canada and Mexico won most of the votes to be granted the right to host matches of the 2016 FIFA World Cup. The voting took place at the 68th FIFA Congress and the only competitor to the joint bid was a bid from the Moroccan Football Association.